By Preston Nibley
The Deseret News and Telegram — March 5, 1955 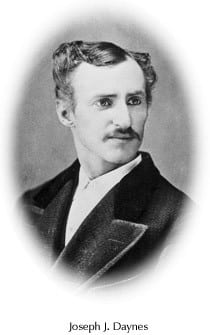 Joseph John Daynes, a native of England, a convert to the Church and emigrant in 1862, was the first Mormon Tabernacle Organist. he began at the age of 16, and served continuously for 33 years. In addition, he was composer of some of the choice melodies sung by the Latter-day Saints.

Joseph J. Daynes was born in Norwich, England, on April 2, 1851. He was the son of John and Eliza Miller Daynes. His father, John Daynes was a watch maker by trade, but it appears that music was his hobby, as he purchased a piano for the use of his family and formed a glee club which practiced at his home.

The boy, Joseph J., learned to play the piano almost in his infancy. At the age of four he was able to play tunes which he apparently learned without the aid of a teacher. At six years of age, he had progressed so rapidly with his music that, according to members of the family, he was presented in an organ recital before Queen Victoria.

It was during these early years that Joseph’s parents, John and Eliza Daynes, joined the LDS Church, and, in 1862, they sold their possessions in England and began the long journey to Utah. John Daynes brought with him across the plains a small “melodeon,” and a harmonium. The boy Joseph J., then 11 years of age, entertained the Saints with his music, around the campfires at night.

After the arrival of the family in Salt Lake City, President Brigham Young heard the boy perform on the harmonium and exclaimed: “there is our organist for the Tabernacle organ.” Thus, when the large tabernacle was completed and its doors opened, for the first conference, in October 1867, the young man who played the organ was Joseph J. Daynes, 16 years of age.

As the years passed the young tabernacle organist wrote for many of the Latter-day Saint hymns. Following are a few for which he composed the music:”Providence is Over All”, “Glory to These Latter-days”, “We’re Not Ashamed to Own the Lord”, and “As the Dew From Heaven Distilling.” The last named is the theme melody that closes the Tabernacle Choir broadcast each Sunday.

At the funeral of Brigham Young, held in the great tabernacle on September 2, 1877, Joseph J. Daynes presided at the organ and played an impressive piece of music he had composed for the occasion, entitled: “Brigham Young’s Funeral March.”

He also wrote an inspiring anthem, “Let All Israel Sing,” for the dedicatory service of the Salt Lake Temple, held on April 6, 1893.

After serving 33 years as tabernacle organist, during which time he established the first free organ recitals, Joseph J. Daynes resigned his position in October 1900. His death occurred at the LDS Hospital on January 15, 1920. He was 68 years of age.

At his funeral held in the 20th Ward, Evan Stephens said of him: “He was without doubt one of the greatest organists of his time. In the experience I never heard his equal as an accompanist for the choir or soloists. I hold him as ranking among the greatest musicians anywhere.”