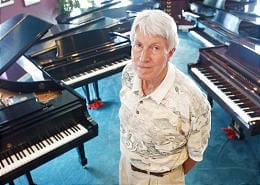 Not all of the pioneers are dead. Pioneer firms are still serving Utahns, including Daynes Music.

After the first settlers rolled their wagons into the Salt Lake Valley in 1847, they set up shops doing anything from engineering to harness making. This was definitely the place for a few of the early entrepreneurs, who transformed their businesses into companies still serving Utah today.

One such business is Daynes Music Co., which had its humble beginnings as a jewelry and piano store on 100 South in downtown Salt Lake City. The company that opened in 1862 — just 15 years after the pioneers entered the valley — is in its fourth-generation of ownership by the Daynes family and continues its music traditions today.

“Over all the years, I think that the hard part about taking over a business is anticipating what the business needs to survive,” Daynes said.

“I decided that I could keep the business running if I could do everything myself including delivering the pianos,” Daynes said.

A member of The Church of Jesus Christ of Latter-day Saints, Daynes said it is important to “keep Daynes Music available to Mormons because of the pioneer spirit many of us strive to maintain.”

The Deseret Morning News opened within the first decade that pioneers were in the valley. On June, 15, 1850, the first edition of the paper was cranked out on an old Ramage hand press.

The News has continued through the ages and serves as Utah’s oldest commercial institution. It has grown to a circulation of more than 75,000 statewide, according to the Audit Bureau of Circulation.

Long before ATMs and drive-up windows, Utah pioneers were using early banking services from Wells Fargo & Co. The banking and express services business set up shop between 100 and 200 South on East Temple in Salt Lake City as early as 1865.

“Wells Fargo is one of only about a dozen Fortune 500 companies founded in or before 1852 still in their original business and using their original name,” said Amy McDevitt, Wells Fargo vice president for regional banking communications.

Jim Wood, director of the Bureau of Economic and Business Research at the University of Utah, said a pioneer business must be pretty special to last.

Wood said the American economy has gone through several transitions since 1850, and technology has dramatically changed business.

“You have technology, you’ve got the market with mergers and acquisitions, geopolitical and globalization changes, and all of those things make it hard for a business to survive,” Wood said. “To endure those transitions, you’ve got to be either very nimble or very insulated.”

Daynes said computers have changed his business, and he thinks it is a lot harder for him than it was for his grandfather.

“The new technology today has really made it difficult for young families today to realize the essential role that music plays in a healthy and vital society,” Daynes said.

At one point, under Daynes’ grandfather, Royal Daynes, the music company had 25 stores in Utah, Idaho, Wyoming, Montana and Nevada. The company still has agents in all of the areas, but now they have only one building, at 6935 S. State in Midvale.

“The third generation had a hard time, given changes in the music business, away from making music to consuming music” Daynes said. “I had to pull it up by the bootstraps and continue the business.”

A couple of business staples from the early Utah territory have merged or transformed into new businesses during the past 15 decades.

Zions Cooperative Mercantile Institution (ZCMI), founded in March 1868 by early LDS leader Brigham Young, but was purchased in 2000, and now is ZCMI in name only.

ZCMI, which originally sold items like clothing, wagons, machinery, sewing machines and carpets, is said to be the first full-line department store in the United States.

The Browning Arms Co. continued through generations after starting as a small gun shop in Ogden in 1852. John Moses Browning took over the shop when his father, Jonathan Browning, passed away in 1879. John invented his first rifle in 1878 and formed the Browning Brothers Co.

John Browning “is considered the greatest gun inventor ever,” said Paul Thompson Browning, media relations manager. “He didn’t have a lot of schooling; he was just a self-taught individual and basically said ‘I was in the right place at the right time.’ A lot of his designs were considered as contributors to us winning World War I.”

In 1927, a year after John passed away, Browning arms became a corporation, and in 1977 it was purchased by Fabrique Nationale of Belgium, leaving Daynes Music as the oldest family business in Utah.

Other early Utah businesses that have carried on through the ages include Zions Bank, established in 1873; the Lagoon amusement park, created in 1886; S.E. Needham Jewelry, begun in 1896; and Utah Woolen Mills, established in 1905.

Wood said that the chances of seeing a business make it through the next 150 years are higher than those that survived the past 150 years, but it still would be difficult.

Daynes Music plans on rolling with the economic tides for the next 153 years, serving generations to come.

“We’ll be here when the rest of the stores have fallen by the wayside because we don’t have the pressures to shareholders and we own all our properties and our inventories,” Daynes said. “It’s very difficult to be in any kind of business, but we’ll see, only time will tell.”